RealEstateCore (REC) is an ontology, which can most easily be thought of as a standard and interoperable schema for building knowledge graphs; it defines the types (classes) of nodes you can have in your graph, the types of relations (object properties) these nodes have with one another, and the types of data values (data properties) associated with them. By using REC, you get two distinct advantages:

RealEstateCore is used with RDF-based knowledge graphs. There is a wealth of information about RDF available on the net, which we will not duplicate here; suffice to say that in RDF, a knowledge graph is made up of a (potentially very large) set of statements, each of which consist of three components: the subject of the statement, the predicate that captures what the statement intends to say about the subject , and the object that carries the value of that assertion. E.g., a graph might include the statement WhiteHouse ownedBy USGovernment, or IBM hasNumberOfEmployees 345900. Due to their structure, a statement is often known as a triple.

In the below we introduce some key REC classes and exemplify their use with RDF triples.

RealEstateCore consists of a set of individual ontology modules, tied together by a shared core. The intent is that users be able to utilize only those modules that their particular use case requires.

We also provide a composed ontology consisting of all modules (RealEstateCore Full), as we’ve found many users prefer to include everything by default. REC Full is available at https://w3id.org/rec/full/.

Note that we use HTTP content negotation to automatically return an appropriate representation of the above URIs in accordance with what the client requests. E.g., if you are using a web browser to access those links, you will get the HTML-based ontology documentation; but if you load them in a tool that requests RDF (e.g., Protégé or TopBraid Composer, you will get that ontology representation instead. 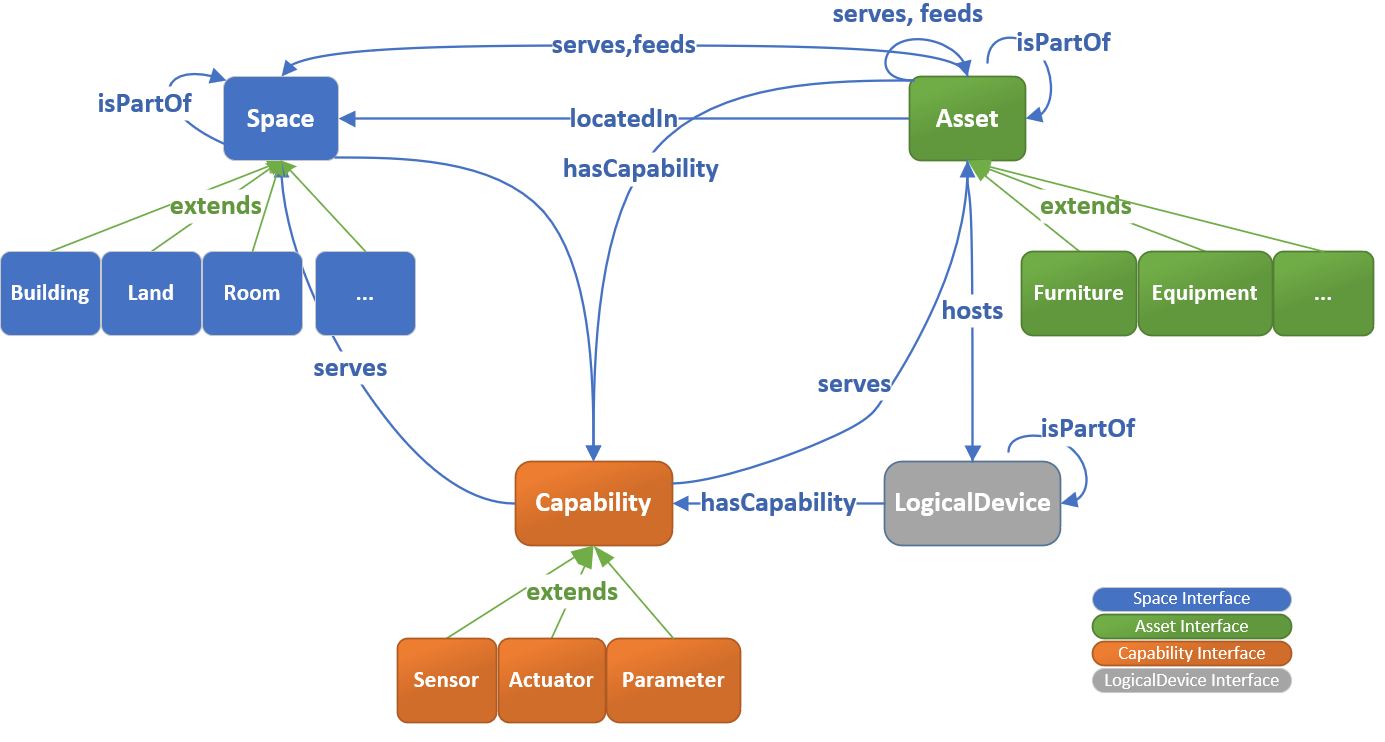 The figure above (borrowed from the DTDL port of REC) illustrates a subset of the key classes in RealEstateCore, which are described in greater detail below.

RealEstateCore employs a set of design principles shared across these classes:

A core:BuildingComponentis a part that constitutes a piece of a building’s structural makeup, for example Facade, Wall, Slab, RoofInner, etc.

A core:Asset is an object which is placed inside of a building, but is not an integral part of that building’s structure. We provide a substantial hierarchy of assests, for example architectural, furniture, equipment, systems, etc.

core:LogicalDevice: A physical or logical object defined as an electronic equipment or software that communicates and interacts with a digital twin platform. A logical device could be an integrated circuit inside of a smart HVAC unit, or a virtual server running on a Kubernetes cluster. Logical devices can have Capability instances (through hasCapability) that describe their input/output capabilities. If Logical Devices are embedded within Asset entities (through the hostedBy property) such capabilities typically denote the capabilities of the asset.

A core:Capability indicates the capacity of a entity, be it a Space, an Asset, or a LogicalDevice, to produce or ingest data. This is equivalent to the term “point” in Brick Schema and generic Building Management System. Specific subclasses specialize this behavior: core:Sensor entities harvest data from the real world, core:Actuator entities accept commands from a digital twin platform, and core:Parameter entities configure some capability or system. Capabilities are connected to spaces or assets using the core:isCapabilityOfand core:hasCapability object properties.

The core:Event class includes subclasses that can be utilized to represent individual observations or actuations in a REC-based system, e.g., core:Observation or actuation:ActuationRequest. For a further discussion on RealEstateCore-based actuation, see our tutorial on the subject.

core:Collection covers administrative groupings of entities that are adressed and treated as a unit for some purpose. These entities may have some spatial arrangement (e.g., an apartment is typically contiguous) but that is not a requirement (see, e.g., a distributed campus consisting of spatially disjoint plots or buildings).

core:Agent describes any basic types of stakeholder that can have roles or perform activities, and is subclassed into, e.g., people, companies, departments. This bears some resemblance to FOAF, which it was originally inspired by, but has since diverged due to requirements shift.

We heavily reuse QUDT.org for observable property quantity kinds ( Temperature, Pressure, Angle, etc.) and for measurement units. In order to reduce complexity and dependency on remote IRIs we have opted to clone their design into REC as-is, maintaining the original namespaces.

For every REC release, we auto-generate documentation directly from the ontology and its annotations; see the documentation site, where each version is listed, at https://doc.realestatecore.io.

For an overview of RealEstateCore (or other ontologies) we recommend the use of WebVOWL. A version of WebVOWL is embedded in the autogenerated documentation.